Back Bay Kids: Where to Play Outside

Boston is a wonderful city in which to raise a family. The convenience of the local amenities, the proximity to amazing public and independent schools, and the wonderful outdoor spaces that can be found around every corner combine to create a truly supportive environment.

Kingsley is situated in the heart of the Back Bay neighborhood, and our community and neighbors enjoy a number of great outdoor activities with their families. If you've ever wondered where to play outside in the Back Bay area, this list of our favorite spots is for you!

Commonwealth Avenue, or Comm Ave as you usually hear it, is one of the main thoroughfares of the neighborhood. In fact, you can take Comm Ave from downtown Boston all the way through Newton, before it becomes South Street, in Weston.

In the Back Bay, Comm Ave is bifurcated by the Commonwealth Avenue Mall. The Comm Ave Mall is a 32-acre linear park, situated between the eastbound and westbound lanes of Comm Ave. The tree-lined park was designed in the style of the French boulevards, and was a centerpiece of the newly developed Back Bay area. It also acts as a crucial link between the Boston Common and the series of parks designed by Frederick Law Olmsted—The Emerald Necklace. 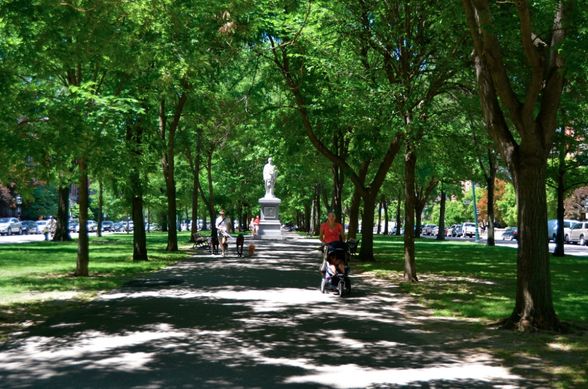 Besides being a lovely, tree-shaded walkway between neighborhoods and parks, the Comm Ave Mall boasts a wide amount of open space and a number of attractions that will interest visitors of all ages.

The Comm Ave Mall is home to a number of sculptures commemorating watershed moments in the history of Boston and the United States. Between Hereford Street and the Public Garden you will encounter nine different sculptures, commemorating different people and moments that changed the course of history in our country. 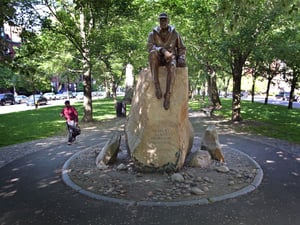 This is an easy, flat walk that suits families well. This is a great introduction to exploring the wonderful art and architecture of Boston from a historical perspective. Dogs are also permitted along the Comm Ave Mall, and you'll be sure to see a few of them!

The Comm Ave Mall is also home to a number of different trees, flowers, and plants that are a joy to observe throughout the year. The fall foliage along the walk is always breathtaking, as are the views during the Spring bloom! Even beyond the borders of the Mall, you can view a plethora of flowering trees and shrubs along the sides of Comm Ave, and into the Boston Public Garden.

Over the years, some of the many elegant elm trees that line the park have succumbed to Dutch Elm Disease. While losing one of our beautiful and historic elms is always sad, it also provides opportunities for learning, and regrowth! One such tree, which was cut down to stop the spread of the disease, lives on today as The Living Stump. Signs at the stump explain how leaving the stump intact and alive helps to support the surrounding trees, as their root systems are intertwined. The Living Stump also helps to disperse nutrients and pest control substances throughout its root system, to further support its neighboring trees. The Living Stump is a great lesson in urban conservation and creative natural problem solving! 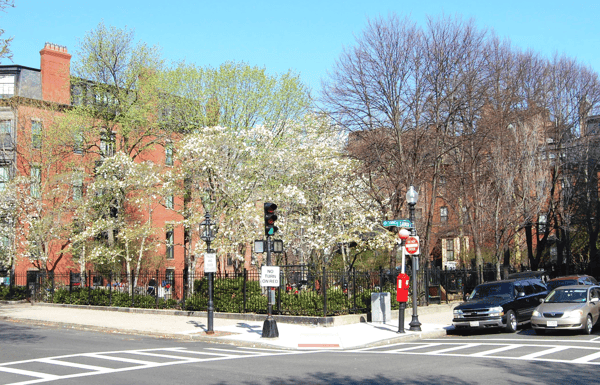 While you're out for a walk on Comm Ave, you'll likely cross over Clarendon Street, between Berkeley and Dartmouth Streets (they are aligned alphabetically). When you do, you'll probably notice the Clarendon Street Playground, also known as the Back Bay/South End Playground.

Kingsley utilizes this playground on a regular basis as part of our outdoor activities, and our students love it! We often hear families making plans to head to the playground after school, and on the weekends as well.

The Clarendon Street Playground is a great example of an urban playground. Occupying a corner lot on Clarendon and Comm Ave, the fenced-in playground provides a multitude of fun activities for a variety of ages. While not a sprawling park, it makes great use of space to include multiple swing sets, a multi-level play structure, a miniature rock-climbing wall, sandboxes, and an open space for games and sports. With seating, shady trees, and even bits of artwork interspersed throughout the park, it makes a great place to spend a relaxed hour or two with family and friends.

Another favorite among our families and the Boston populace in general is the Charles River Esplanade. The Esplanade is another linear park that winds its way along the Charles River on the border of Back Bay. With expansive views of Back Bay in one direction and the Charles River with Cambridge beyond in the other direction, the sheer beauty of the area is enough of a reason to stop by. But this area also offers a host of activities 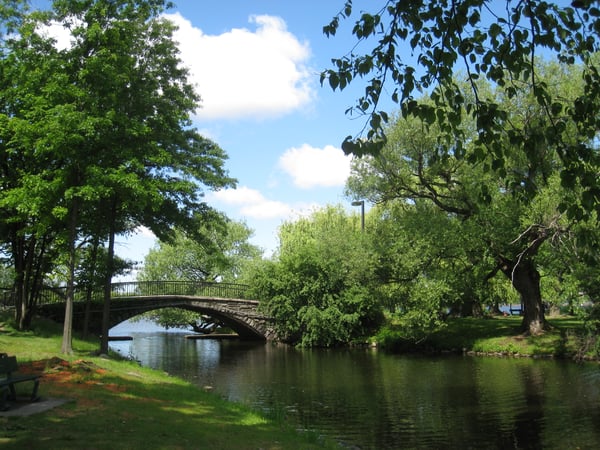 One of the biggest draws to the Esplanade for parents are the great playgrounds! The Esplanade technically houses three playgrounds, with two of them situated within Back Bay.

The Stoneman playground, between Hereford and Gloucester Streets on the Esplanade, is a great playground for all ages. This play space has wide open areas to run and play, along with playground staples like swing sets for toddlers and older children, jungle gyms, and slides. This playground is a gift from the Stoneman family, who realized and understood the importance of a safe, enjoyable play space for Boston children.

The other playground in Back Bay is known simply as the Esplanade Playground, and is located near the end of Berkeley Street (toward the Boston Public Garden end of the Esplanade). This is a 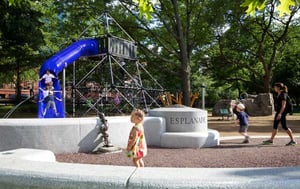 favorite among the Boston playgrounds—its giant, modern-styled climbing structure; a kid-friendly zip-line; a variety of slides and swings, of different designs; climbable art installations; and plenty of seating and shade, make this playground a treat for all ages! This playground is truly one-of-a-kind and your children will surely get excited over the creative new play structures.

The Charles River Lagoon is a great area to picnic, explore nature, and watch the comings and goings of sailboats and kayaks. The man made lagoon (all of Back Bay is man-made, really) is a wonderful spot, crossed by beautiful, arched footbridges. Taking a stroll across one of these footbridges, surrounded by water and shaded trees, really makes you feel like you've stepped outside of the city, without ever leaving Back Bay. Enjoy meeting the various geese and swans who frequent this area of the Charles, enjoy the wonderful variance of trees and flowers, and if you plan ahead, you might just get an amazing view of Boston's Fourth of July Fireworks Display! 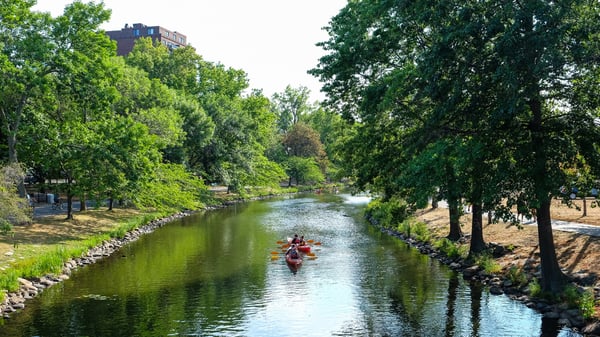 Traversing the Esplanade is easy, thanks to the Dr. Paul Dudley White Bike Path. This path winds its way through the entire Esplanade and is a great place to stretch your legs for a jog or a bike ride. Take in all of the scenery as you work your way down the path, parallel to Storrow Drive. Cruising through this bit of urban paradise with the breeze coming off the water is truly one of the joys of being in Back Bay!

No account of the Esplanade is complete without mentioning the Hatch Shell. The historic Hatch Shell is named in memory of Edward A. Hatch, a member of a prominent Boston family and a successful business man. When Hatch passed away in 1910, his estate passed to his sister, who eventually bequeathed it with the terms that it would be used to create a public "park, playground, or memorial" in the Boston area. Eventually, this dream was realized with the creation of a permanent 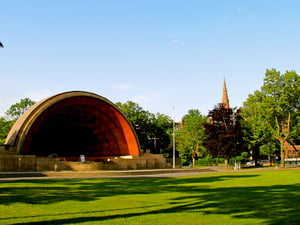 concert hall on the Esplanade. The Hatch Shell was originally constructed in 1928, but a revised structure, in the location of today's Hatch Shell, was erected in 1940. Since then, the Shell has undergone two major renovations, in 1989, and again in 2018.

The Hatch Shell is the home of the Boston Pops Fourth of July Celebration, and is an amazing spot to catch the music and the fireworks. Throughout the summer, the Shell is used for concerts, movie-showings, and events. During the day, the large, grassy pavilion is perfect for picnics, relaxed sporting events, or just taking in the sun and breeze.

Coming back to the city-side of Back Bay, it's always fun to tour Copley Square. This historic quadrangle, named after portrait painter John Singleton Copley, is one of Boston's best spots to take in architecture, art, and culture. The square itself is filled with fountains and sculptures, and the surrounding blocks are full of historic and culturally significant buildings and institutions. 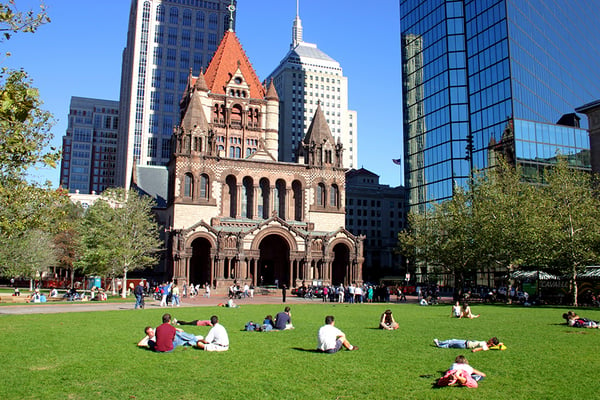 On one end of the square, you'll find Trinity Church—designed and built in the 1870s, in the Richardsonian Romanesque style. This building is one of Boston's best known houses of worship—due in large part to the history of the congregation (dating back to the 1730s, at a former location), and the grandeur of the building itself. Trinity Church is a gem of Boston architecture. 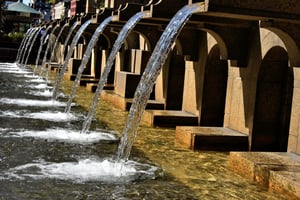 Copley Square, formerly known as Art Square, has always been a cultural center for Boston. Today, there are various sculptures to enjoy around the park. The full-sized sculpture of John Singleton Copley is quite impressive, but we are partial to the tortoise and the hare sculptures that can be found right by the Copley Square Fountain!

The Public Garden is filled with beautiful trees and plants from around the world. Depending on the time of year, you may also find a variety of wildlife, including the resident family of swans. You'll also find a number of beautiful fountains, sculptures, and memorials. For the history-minded, a tour of all of the sculptures and plaques is a great way to learn about the history of Boston and Massachusetts. 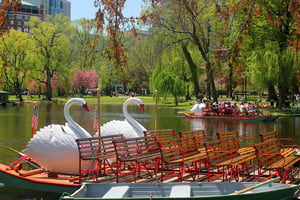 Speaking of swans, no trip to the Boston Public Garden is complete without a ride on the Swan Boats. In operation by the same family since 1877, these hand-crafted and pedal-powered boats are the perfect relaxed way to tour the pond and the park. The Swan Boats are a great way to experience a bit of Boston the way folks did over a century ago.

The Boston Common Frog Pond is a long-standing man-made "pond" that serves a variety of purposes throughout the year. In the spring and fall, the pool is generally used as a vast reflecting pool. In the summer, the pool becomes a wading pool, complete with a spray fountain. Frog Pond 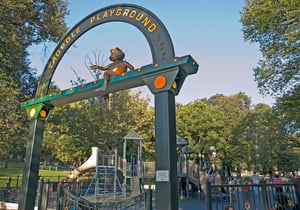 may be best known for its use as a winter skating rink, through.

No matter the season, no matter the weather, there is always something fun, interesting, and active to do in the Back Bay area. We know that there are many more great places and ideas for how to spend a day in Back Bay. Leave a comment here with your favorite things to do in the community!

Follow our blog for more great ideas and insights from Kingsley Montessori School!

Copyright 2020 | Designed with by HubSpot